SOLANOVA - Building for Our Future

Buildings are imperative for humans. Buildings embody human culture. Buildings are a legacy for future generations. The current building stock reflects a culture of inconsiderate use of resources and partly even neglects the well-being of the inhabitants. Therefore buildings must be a focus point in strategies to reach a sustainable future, where
SOLANOVA – "Solar-supported, integrated eco-efficient renovation of large residential buildings and heat-supply-systems" started in January 2003. SOLANOVA ist the first "Eco-buildings" project of the European Commission in Eastern Europe dealing with a "major renovation" of a large existing building. Thus SOLANOVA serves as best practice example for the proper implementation of the European Union’s Energy Performance of Buildings directive. Ongoing renovations of the huge stock of large residential buildings only result in minimal non-sustainable improvements. In order to achieve sustainable improvements, SOLANOVA proposes a symbiosis of three strategies:
In 2005, one 7-story-panel-building in the Hungarian town Dunaújváros has been transformed into Europe’s first 3-litre-panel-building by consequently applying the passive-house-philosophy to an extent, which was judged to be best practice for retrofit. Overnight solar energy provides more than 20% of the total consumption for space heat and domestic hot water. Mainly this is due to a drastic decrease of space heat consumption, which was 220 kWh/m2a before retrofit.

In Eastern Europe ca. 100 Million people live in large panel buildings. But SOLANOVA's findings
may be easily transfered to the large stock of Western European panel buildings and to any other kind of large residential buildings, too.

SOLANOVA has won the 3rd prize in the Energy Globe award, category earth. As such SOLANOVA was selected to be one of the 15 world best projects among a total of 732 applicants. The Energy Globe is the most renowned world award for sustainable projects. The final round took place in the plenary hall of the European Parliament in Brussels, within a splendid TV-gala on April 11, 2007. The gala featured several international personalities and stars like Maneka Gandhi (former Indian minister for environment), Nigel Kennedy (star violinist), Robin Gibb (pop star, member of Bee Gees) and Martin Sheen (hollywood star) and attracted attention from TV and radio stations all over the world. 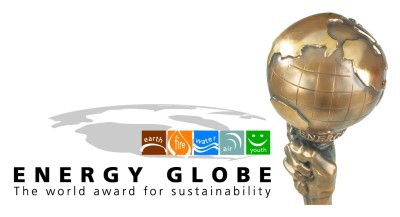 SOLANOVA has won the Energy Globe Hungary. The certificate was handed over to the coordinator University of Kassel (Center for Environmental Systems Research) represented by Andreas Hermelink in a ceremonial act on April 10, 2007 in the European Parliament in Brussels.

The project coordinator University of Kassel (Center for Environmental Systems Research), represented by Andreas Hermelink and Hartmut Hübner, has won the European Solar Prize 2006 for SOLANOVA. The award was handed over in a ceremonial act in Berlin on December 7, 2006.